To make things a bit more confusing, I am going to write blog posts in English every now and then. Especially when they directly involve Americans:-)

On Monday I took a bus from Penn Station to Virginia Beach. The main challenge here was to get all my stuff from the hostel to 34th Street. In addition to all the bags on my bike, I carried my big suitcase on the rack of my bike. The plan was to then put all the stuff in the suitcase, since the bus company officially allowed only one piece of checked baggage. It wasn’t really comfortable to ride like this, but I actually made it to the place of departure without any problems. The bike ways along the Hudson River were excellent! The 7-hour-long bus ride went by really fast.

In Virginia Beach I was picked up by Maggie and Nick in the pouring rain. Being a master of procrastination, I had contacted them on Warmshowers – a site for traveling bikers – only two days before arriving. Both Maggie and Nick had really interesting biographies and were a lot of fun to be around! Here are some of the things they did for me: provided me a place to sleep, prepared an outstanding dinner and breakfast, helped me find a route to False Cape State Park, and they even had a spare bungee cord for me.

The next morning I started my big tour. Thanks to Nick’s help I didn’t have to take any roads with a lot of traffic during the whole day. The weather wasn’t really working in my favor though, it was really windy and it rained quite a bit. One road (Dam Neck Rd) that I took suddenly turned into a military road, so I had to ride about a mile back and go a different way. A quick look at the offline maps on my phone made this easy.

In the afternoon I arrived at False Cape State Park. The wind was even stronger now and I had to stay focused not to be blown of the gravel roads. Some miles later I arrived at the Park’s office to ask for a permission to pitch a tent for the night. First they wouldn’t let me, because it would have been necessary to make a reservation one day in advance due to the limited amount of camp sites. Some small talk about Germany and biking with the manager then helped to solve this problem. My tent site was located just behind the dunes about one minute from the Atlantic Ocean. It felt like I was the only human in a 3-mile-radius that night. After setting up my tent, I packed up some food and had dinner at the Ocean. 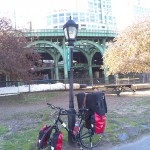 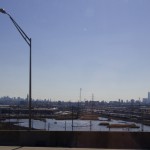 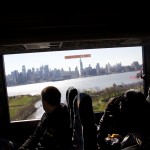 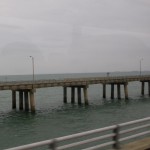 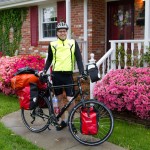 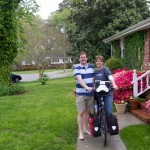 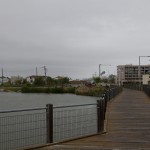 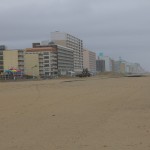 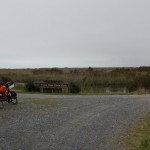 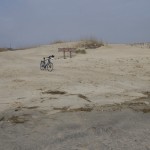