…and then I was there. In the tradition of people crossing the United States on a bicycle Sean and I dipped our front wheels in the Pacific in Everett on July 15. Well technically it wasn’t the Pacific, but the Possession Sound; which I think is pretty close though. After we said goodbye I waited for about an hour until Junxia and his girlfriend Shan came to pick me up. It was so good to see one of my best friends from high school in Germany on the other side of the world again after all that time. For dinner, we went to a Mexican place in Everett and caught up on stories old and new.

The next morning I enjoyed breaking the routine of packing up all my belongings and riding a bicycle for the most part of the day, which I had been used to for the last two and a half months. All these little things that I hadn’t done all that time suddenly felt really great, like riding in a car to get lunch. For the next four days I stayed with Junxia and his roommate Jason in Bellevue. Jason’s friend Ross from New York City was also there for a visit, so the place was filled with people. Since Junxia had to work the next day, Ross and I took the bus to Seattle and “discovered” the city on our own. The following days I hung out with Junxia and his friends. He showed me all the cool spots in Bellevue and Seattle and we even went to a Yoga session. And I thought I was too young for that:-)

Some days later Junxia took me to the Amtrak station in Seattle. Ahead of me was a 22-hour-train-ride to San Francisco. As an avid train rider from Europe, taking that Coast Starlight train felt like going back in time. But mostly in a good way. The train was really slow, but that only made going through the Cascade Mountains more spectacular. There was plenty of space to stretch out, not like in most German trains where a coalition of engineers and businessmen manage to fit more people in a single car with each new revision. On two occasions the train stopped for about an hour while going up a hill because the engines had overheated. Luckily the train conductor was also a bit of a comedian, so people didn’t really care. This train was also a good place to meet some really interesting people. Sarah, who was sitting beside me, made bikinis from plastic litter. Later in the dining car we met some young folks who prepared well for the trip and handed out a Rum and Coke to each of us. We talked about anything from electro-swing music to skateboarding until we eventually all went back to our seats to catch some sleep.

Upon arriving in San Francisco I faced the same problem like in New York City a couple of months earlier: A big suitcase and an even bigger bike box make it almost impossible to catch a cab in a big city. This time I decided to dispose of the cardboard box and to push my bicycle and the suitcase at the same time. Since the hostel was only two miles away this worked fairly well. It was located in the Tenderloin District of San Francisco, which definitely lived up to its reputation (that I didn’t know of before). All in all I only had two and a half days in San Francisco, so I tried to grasp as much of the city as I could. Maybe my expectations were too high or maybe I was rushing things a little bit too much, but I didn’t find San Francisco all that interesting compared to some other bigger cities that I had been to in the United States. Crossing the Golden Gate Bridge and driving down to the beach was great, but I was lacking time to discover the city’s soul. I guess I should have pedaled faster going across America.

The whole 3-month-long trip eventually ended at San Francisco Airport. I bought a ridiculously overpriced box for my bicycle there and mailed the last postcards. As I entered the airplane back to Europe, I slowly started to realize that this tour and the following vacation now was a thing of the past. But I will always remember it as the trip of a lifetime! The End.

This is the last regular post from my travels. I will probably do some more front-end work on the blog to make it look more like a finished project. If I find the time, I might write down some tips (in German) for people who want to bicycle across America and add some more details here and there. I also added the GPS-track of the whole trip; it can be viewed on a map (“Landkarte” in the navigation bar.)
Last but not least I would like to thank all people that supported me on this trip! So many people in the U.S. and in Germany have helped make this tour great! 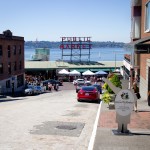 While Junxia was working, Ross and I wandered around Seattle. First stop: Pike Place Market. 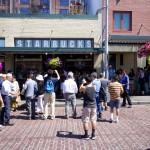 First Starbucks store and a lot of tourists. I am sure there were many more people behind me taking pictures. 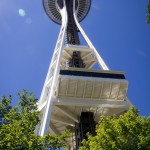 The Space Needle in Seattle. Since it was actually way more expensive than we thought, we decided not to go up. 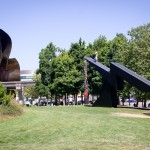 At the EMP Museum in Seattle. 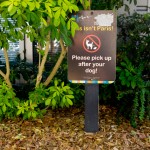 So that’s what dog owners in Paris (don’t) do? 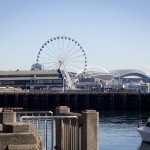 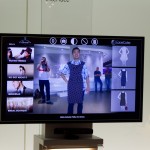 Junxia gave us an extensive tour of the Microsoft campus. He also tried on a new dress. 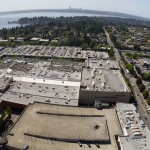 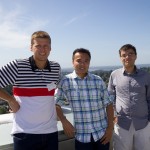 On the balcony of the Microsoft cafeteria in Bellevue with Junxia and Ross. The skyline of Seattle is in the background. 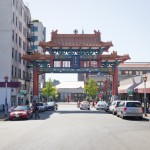 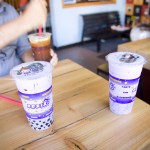 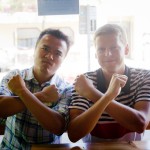 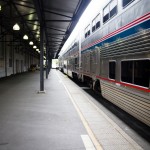 My train to San Francisco at the Amtrak Station in Seattle. 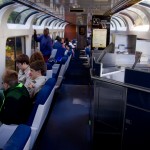 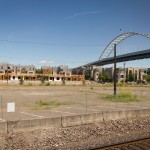 Riding through Portland, Oregon in a train. 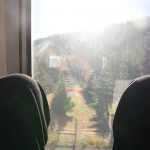 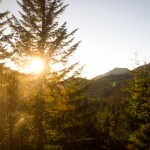 The Cascades in Oregon. Or Northern California. I don’t know. 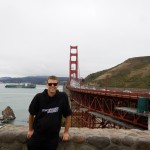 Man in black. Bridge in orange. 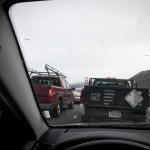 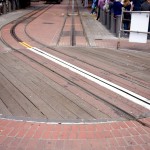 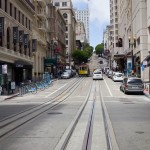 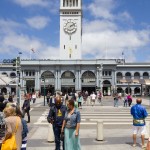 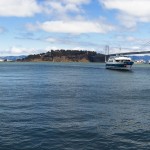 View from behind the Ferry Building. 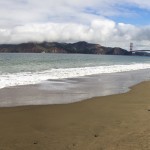 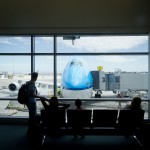